Last Wednesday was my official last day of classes! I’m so relieved that I have some time off to recuperate and enjoy the holidays, but I enjoyed myself immensely and can’t wait to see what semester #2 has in store for me!

These last few months have gone by fairly quickly, but I had a lot of work to push through in that time. I’ve got almost more material from my first semester than I had putting my art school portfolio together. Drawings, paintings, prints, writing papers… I’ve been very busy! The great thing about the subject matter at school is that it all ties together. I used an idea from a computer project in my final drawing project, and used illustration skills in a computer project, for example.

It would take forever to describe each and every piece I did, so I’ll post a few of my favorites over the next few weeks. I recently updated my deviantart page with some new art while applying for a scholarship, so here are a few from there:

Self-Portrait 2012 by ~soulexposed on deviantART

I haven’t had a lot of time to collect outside material for this blog, and I’m just now catching up on my Google Reader, tumblr and pinterest. Between that and some upcoming personal projects, I’ll have plenty to do over the break! Anyway, I wanted to share this Jen Mann painting video I came across on tumblr yesterday.

She’s using my favorite colors, pink & blue, so naturally I’m in love with this piece! She paints with her work flat on the wall, using a photo reference, with oils. It’s very interesting to see how small she works right off the bat, rather than putting down blocks of colors and working over top of them. She blends each section of the face beautifully. Also worth noting is that she paints in a very planned-out way, from the top left corner to the bottom right. It was very educational and inspiring watching this painting come together.

I think that’s enough for now. Stay tuned, as I hope to update several times a week while I’m on break, and maybe even stockpile some posts for when I’m back in school in January.

Lots of things going on! (photo by Tim Lingley)

It’s a good thing I had most of last week’s posts done ahead of time, because I was sick and wouldn’t have gotten them out otherwise. Because of my feeling ill, a little bit of homework has piled up and I’m working diligently to catch up. You may not hear from me on Wednesday or Friday, but I’m hoping to have things back on track next week. The above photo by the awesome Tim Lingley (care of his brand new 5D Mark II!) gives a bit of a glimpse of the several things I have on the go. Teaser: beads, feathers and color wheels oh my!

While I’m frantically arting away, here are some snaps from Instagram (technically Statigram because they make it easier to share) of my new art life!

Drawing has been the most challenging class for me so far. It’s very technical and forces me to slow down and really draw accurately. Both classes and homework assignments are time-consuming, but extremely rewarding. I feel like I’ll see the most improvement over the year through this class . 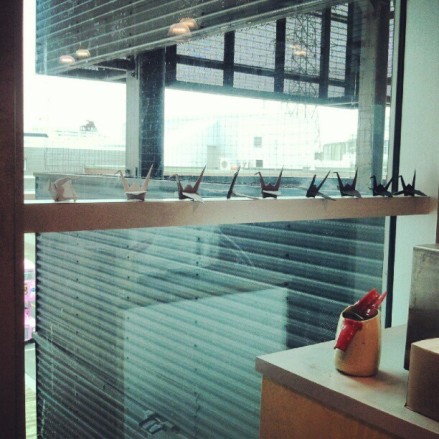 Art isn’t just the subject of choice at this school; it’s a way of life. It’s celebrated both inside class and out, even in the lunch area. Every once in awhile I’ll see a sculpture hiding above a door, or creatively drawn notes on the bulletin board, and it makes me smile. I’m so happy to be in such a wonderful inspiring environment. So much love!

I’ve been down Barrington street many times, even before moving to Halifax, and this remains my favorite building on that street. Even the broken down abandoned buildings are turned into pieces of art. There is so much art within Halifax and so many galleries that no matter what your taste, whether low-brow or high, fine art or commercial, there’s bound to be something for you.

Hope everyone has a great week! The autumn colors are starting to peak through the leaves and the air is crisp; enjoy it while it lasts!

My last day of work at my day job was yesterday! I feel so utterly content and relaxed this morning, knowing that I’ve taken a really big step towards accomplishing my dreams. Though I’ve learned a lot in the past six years doing technical support, it’s time for me to give art a bigger place in my life. A lot less of my time will be spent in front of a computer, and much more of it will be spent in front of books or an easel. Whether it’s learning art history, or sketching, or sculpting or whatever else NSCAD has to offer, I’ll be learning about art for the next four years of my life starting in September. I wish I could start Monday! 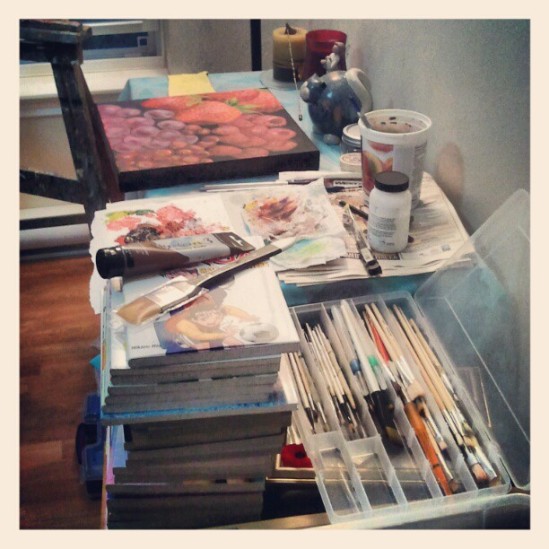 Last night I was able to finish off a commission I’d been working on for the past week and a half and Tim took some photos of me working. It felt really good to paint and know that it’s more than a hobby now, it’s a way of life. I am so happy and so excited to get into school and do this all day!

Painting isn’t always pretty work, especially in the summer. When working with acrylics I really can’t have a fan on because the paint already dries so quickly. It’s sweaty, messy, and I usually end up with paint on me without knowing how it got there. It doesn’t really matter though. I’m not paying attention to all that stuff because I’m too busy enjoying the process.

Over the next week w’ll have to pack our apartment away, but since I’m home I should be able to squirrel out some time to do proper entries. Thanks for your patience, everyone! Have a great weekend!

In the interest of feeling better about myself and being a more open and honest person, I finally feel like it’s time to reveal the ~big news~ I’ve been hinting at over the past few months. I’ve been keeping it to myself because I don’t know how well received it would be to some, but in the end, I have to do what makes me happy and need to stand behind my beliefs 100%.

I’m going to art school in the fall!

Two years ago I decided that I wanted to get into art again after having ignored it for a few years prior, and soon after, I started wondering why I didn’t attend art school in the first place. To make a long story short, I decided that it was time to make art a part of my life again in a big way. Spurred on by a particular thread at Concept Art Forums (NSFW language), I began drawing once a week, then a few times a week, then every day. I took as many classes in as many different medias as I could find and hit the ground running. Starting in January 2011 I put together a portfolio of works (contains nude drawings) to submit to art schools around the Maritimes provinces. My first two choices, both of which I’ve been accepted into, are Nova Scotia College of Art & Design (NSCAD U, Bachelor of Fine Arts Interdisciplinary) and New Brunswick College of Craft & Design (NBCCD, Foundation).

As excited as I am for this, it’s also pretty nerve-wracking, as my husband has yet to find work in my #1 choice city, Halifax. There’s a possibility that if he doesn’t find work there we may go out west, as far as Toronto. I’d basically be set back a year since all of the art school deadlines out there have already passed, though in the mean time I could try and take some courses at a community college to transfer for 2013. Either way, as of September 2012 I will be doing art full time.

I decided on today to tell the world about this since NSCAD recently contacted me to say that I could start studying as early as July (and as of a few hours ago, I’m registered for fall classes!). I’m hoping that networking with as many people as possible will help this move happen, so if anyone out there in the blogosphere has any info that could help us along, please message me!

Onto some progress I’ve made since I got back from the big road trip: 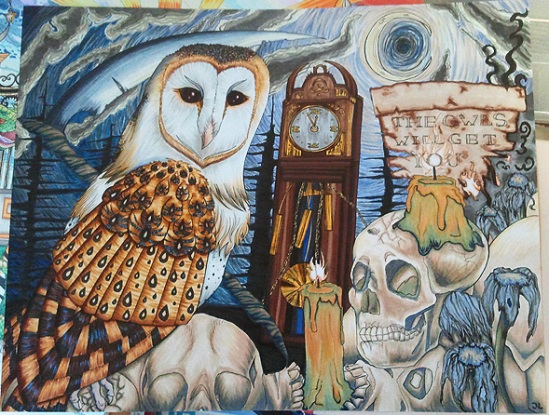 Owl of Death by Jess Lingley

I finished off the last owl of the set on the Sunday we got back. Whew! The most fun I had on this one was probably the sky, with the most challenging part being shading the skulls. I enjoyed coloring the feathers as well but was getting a little cross-eyed by the end of it. It’s nice to have this project finally done; I’m pretty happy with how all three pieces have turned out . I’ll post some more photos later on when I have proper frames for them, and higher resolution images.

progress on models by Jess Lingley

I started into the second color of this under-painting after I finished the last owl drawing. I used blue for the cloth and red/pink for the models themselves, since I wanted to have those colors as undertones and keep the two well separated in the final product.

I tried to put as much detail into the under-painting as possible, including some shading and patterns in the dresses. The patterns are very hard to see; I had to crank the contrast and dim the gamma on the original image to be able to make out the details at all, but I think it will pay off when I go to paint over it. 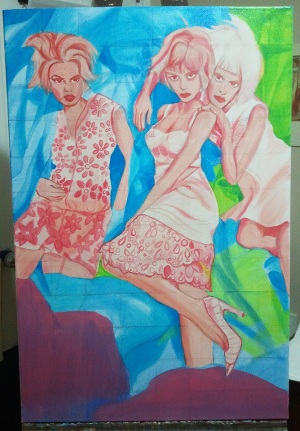 first layers of oil paint on models by Jess Lingley

Last night I started in on the glazes for the background, which I plan to complete before moving into the main subjects. I tried to keep the colors thin since normally, I pile them on, and wanted to try a different technique. I’m still a little worried that the grid is going to show through, but I can always touch that up at the end if I still need to. I really like the psychedelic-vibe this piece has going on at the moment. Hopefully this will be dry enough in a few days for more layers.

Have a great weekend everyone (long weekend for those of us in Canada), and see you on Monday!